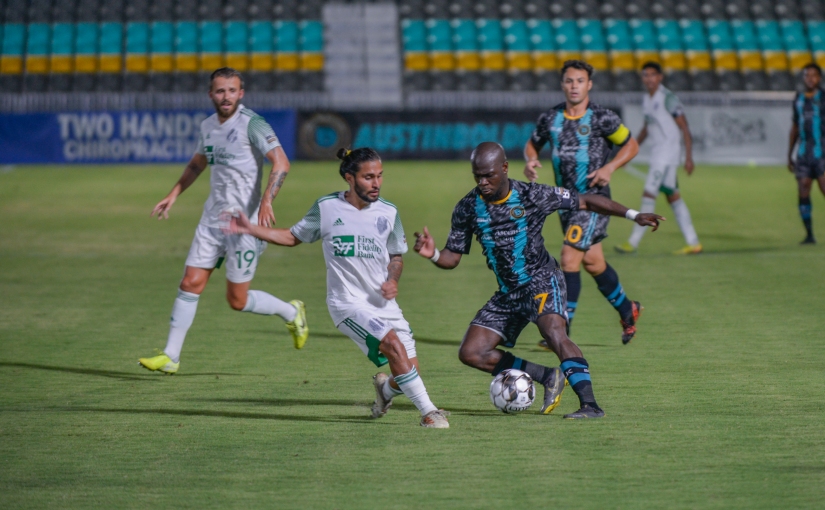 Individual errors led to allowing the trio of goals, falling for the second time at home by a score of 3-0.

After a fruitless first half, the Energy were more dangerous in front of goal, but ultimately were unable to get back into the game late.

Arun Basuljevic threw his team a lifeline out of halftime, winning a penalty and sending Jaime Chavez to the spot with a chance to pull within one goal.

For the first time in his career, Chavez was unable to convert. He sent the goalkeeper to the left, but sprayed his shot wide of the right post.

“In missing [the penalty] I think it deflated us a little bit,” Energy coach John Pascarella said after the match.

“I think you make it 2-1 at that moment in the game and it changes.”

The inability to finish off chances has been an unwanted theme for the Energy at home so far this season.

Basuljevic acknowledged the team had to get past the disappointment of the penalty.

“Obviously if we score the penalty, maybe the game looks different,” he said. “But these things happen in soccer so yeah we just gotta work on it.”

Outside of the penalty, the change in system from a five defender setup to a back four gave Oklahoma City new life.

Chavez and Basuljevic were often stranded with no service in the first half with so many players dedicated to defense.

“I think part of that’s my fault,” Pascarella said. “The way we shaped the team, we didn’t get Arun [Basuljevic] and Jose [Hernandez] close enough to [Chavez].”

Basuljevic said he felt more isolated in the first half, but he said it’s ultimately on him to get involved.

“I just need to figure out how to be more dangerous, even in that formation,” he said.

Unfortunately, it appears to be different mistakes every game which lead to giving away goals.

“We’re looking for a level of consistency and we haven’t gotten there yet,” Pascarella said. “When one thing gets a little better, something else gets a little iffy.”

Gaining a better understanding of how to play together by getting more matches under their belts will help, Pascarella said. It’ll just be about addressing the mistakes and learning lessons from them, Pascarella said.

With half the home slate down, Oklahoma City still has yet to take all three points at home.

It is a struggle to identify what exactly is preventing the Energy from emerging victorious at home, Basuljevic said,

“It’s hard to put a finger on it. There’s no excuses,” he said. “Obviously it’s been a really weird year… but we know that we’re a good enough team.”
Pascarella didn’t pinpoint the struggles to merely playing at home. He said the team has just struggled with different moments in each home match to prevent a complete performance and a win.

“There’s different things in different matches, I don’t necessarily think it has anything to do with being at home,” he said. “It just so happens we’ve been at home more than we’ve been away so we’ll see as we progress along.”

Oklahoma City will have two more chances to notch their first home win in their next two matches.

Kickoff is scheduled for 7 p.m. and those who are not in attendance can stream the game on ESPN+.